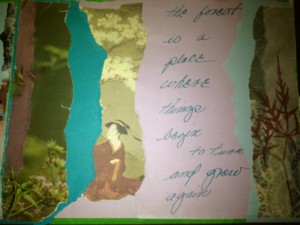 In the story when the Queen’s first wrinkle appears she falls under a spell
And disappears into the forest-
We don’t know exactly why
Was she banished?
Did she go of her own accord?
And what will she do there?
Grieve?
Look back on her life to sort out what has happened?
Or perhaps
She simply wants to find solitude

We  need time and space to reflect

She must let go of everything
And seek her own experience

If a woman can tolerate the emptiness
The loneliness

The inconsolabale sadness
Something real within her can be born

The words solitude and solace have the same root
Comfort

To find our own zero point

Ann Nix holds a Masters Degree in Counseling Psychology and is a Certified Clinical Hypnotherapist and Group Facilitator in Sonoma, California.